The History of Louis Vuitton began in about 1837. Louis Vuitton attained the talents and expertise of trunkmaking at the age of 16. He was an apprentice in Paris learning how to stitch and make boxes and trunks by hand. Young Louis was extremely meticulous with everything he created. This developed into a passion for excellence and quality. 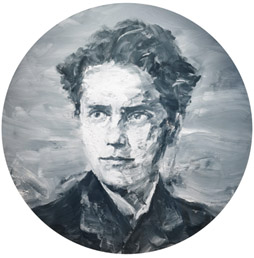 Painting of the Original Louis Vuitton at Age 16

Louis Vuitton History in the 1800’s

Louis Vuitton founded the original Louis Vuitton Malletier in 1854 on Rue Neuve des Capucines in Paris, France. He started out as a luggage maker and in 1858; Louis Vuitton introduced his flat-bottom trunks. The new trunks eventually replaced the rounded ones that were popular at that time. He used grey canvas and more durable material that was unique to what was available at the time. In 1872, he started creating the beige trunk with red stripes.

The popular Damier pattern was released in 1888 due to the immense amount of replicated trunks. 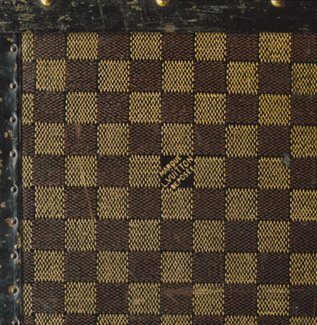 After his passing in 1892, his son, Georges decided to grow the company worldwide. In 1896 he created the iconic Monogram Canvas with the help of Victoria Era’s Japanese designs. This was a major influence on the history of Louis Vuitton. 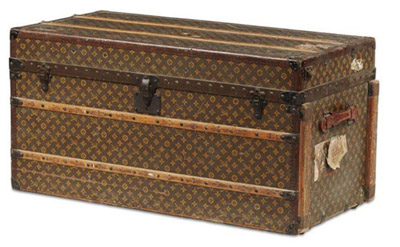 Louis Vuitton History in the 1900’s

The first Louis Vuitton store opened on the Champs Elysees in Paris in 1913. With the success of the flagship store, he also opened stores in New York, Bombay, Washington, London, Alexandria, and Buenos Aires. 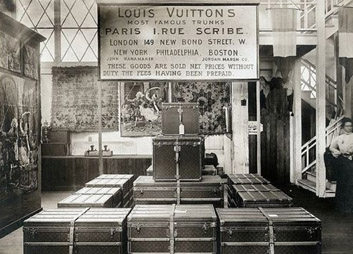 In 1930, the first Louis Vuitton handbag was introduced and was known as the Keepall Speedy. This name literally stemmed from the phrase “Keep All”, as it was a way for women to keep all of their essentials in an easy to carry handbag. 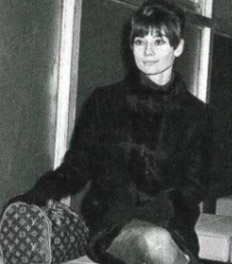 The Louis Vuitton Noe came out in 1932, originally for a producer of champagne. This is a very popular bag even to this day and was created primarily to carry bottles of wine and champagne. The drawstrings on the bag allowed up to 5 bottles to tightly clench together without rattling or breaking. 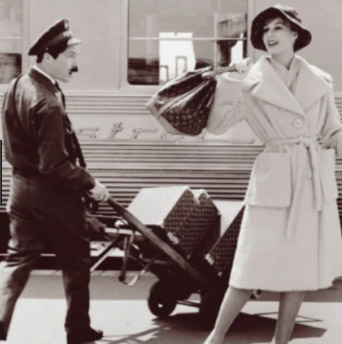 The Louis Vuitton Noe As Seen in 1932

A few years after the introduction of the Noe, Georges designed the Louis Vuitton Alma for none other than Coco Chanel. The Noe was first designed for Coco Chanel in 1925. Coco gave permission for it to be released to the public in 1934. 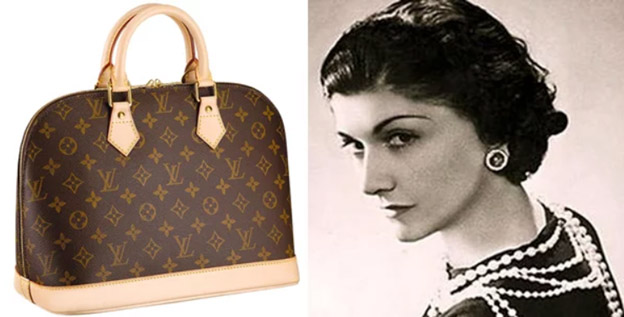 The Noe Was Designed For Coco Chanel in 1925

In 1936, Georges Vuitton died, and his son, Gaston Louis Vuitton, took over the family business. Gaston-Louis introduced leather into the business. This transformed the Monogram canvas into a more flexible material to use on their handbags and small leather products. 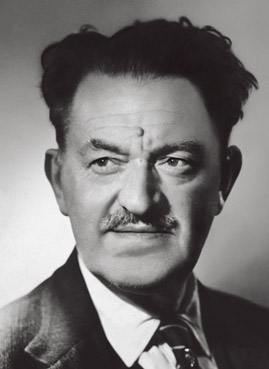 Gaston Louis Vuitton Took Over The Family Business in 1936

Louis Vuitton Epi Leather came out in 1985 and sparked the focus on the versatility of leather. They played with the different textures of leather seen in the 1920’s and created bright vibrant alternatives to the classic monogram or damier patterns. 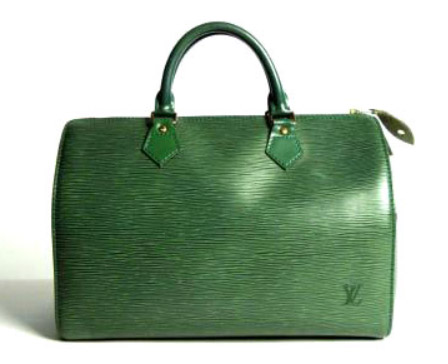 1987 saw the creation of LVMH, which was a merging of Louis Vuitton with Moët et Chandon and Hennessy, to create the largest Luxury Conglomerate in the world.

In 1997, Marc Jacobs took over as the company’s artistic director. He collaborated with many famous artists and designers such as Stephen Sprouse, Takashi Murakami, and Richard Prince. They created some of the most popular handbags that can now be nearly impossible to find. Marc Jacobs also used street artists to inspire some of the best Louis Vuitton handbags. The most popular collection from Marc Jacobs was and still is the Multi Colored Monogram. Paris Hilton and many other celebrities made this bag famous. It is still considered a “unicorn bag” to many women. 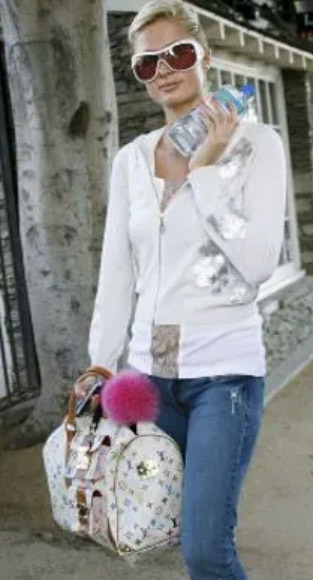 In 2007, Louis Vuitton created the tote to rule all totes, the Neverfull. This is the best selling Louis Vuitton bag of all time and for good reason. It is extremely functional to use as a diaper bag for the mom on the go, a perfect everyday work bag for the busy professional or a status symbol for a night on the town. Similar to how Louis Vuitton came up with the Keepall name, they chose “Neverfull” because you can pretty much put all of your belongings in it and it’s never full. The bag also comes with a detachable clutch that can fit all of your essentials such as your phone, cards and keys. This bag helped cement the history of Louis Vuitton for decades to come. 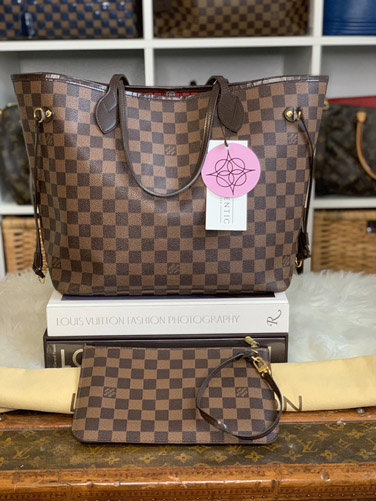 An Authentic Louis Vuitton Neverfull as Seen on HerAuthentic.com

Louis Vuitton introduced the Capucines in 2013. This collection got its name from the first store back in 1854, The Rue des Capucines. This bag became a classic due to its unique design and blank canvas. Several famous international artists went on to create their own limited edition collection.

The extremely desired Montsouris backpacks were reintroduced in 2017. Montsouris comes from a popular park in France. Kanye West and Kendall Jenner are currently two of the most famous celebrities and both are frequently seen rocking versions of the Louis Vuitton backpack. The Montsouris and Mini Montsouris are a spin off the classic backpacks from decades earlier. They radiate a flare of youthful swag that attracts millennials and young professionals. The Louis Vuitton Bosphore backpack is a more spacious and bold bag that appeals more to stylish men and women who like to carry it all. As many influencers continue to wear, promote and idolize the brand, the history of Louis Vuitton has a very bright future. Here is what the Louis Vuitton acronyms stand for, as they relate to the sizes of different bags.

BB: Stands for “Bebe Bandouliere”, which is French for “baby shoulder”. These are the smallest Louis Vuitton handbags and have a detachable shoulder strap. The Alma BB is great to hold necessary items such as a small wallet, a pair of sunglasses, keys, cell phone, small tissue pack, and some makeup.

PM: These letters stand for petite model. It comes from the French meaning “small model”. PM handbags are quite a bit larger than BB bags but smaller than MM and GM. The Alma PM is considerably larger than an Alma BB bag and can easily hold a medium to a large wallet and other accessories such as a phone, glasses, keys and sunscreen.

MM: These initials stand for medium model. These along with the PM are the most popular sizes for Louis Vuitton handbags such as the Neverfull. Louis Vuitton bags like the Totally or the Lockit are durable enough to hold books and laptops. These different bags are great diaper bags and many fashion forward moms rock each of these styles. The MM seems to be the most popular size for most shoulder tote bags. The Alma Louis MM is larger than the Alma PM and can easily hold many items for a perfect everyday bag.

GM: The largest of the Louis Vuitton handbags are the grand model. They are popular to use as travel bags, as you can fit several outfits for a weekend getaway. Louis Vuitton crossbody and satchel bags in the GM size are very popular because they can fit a lot and are quite functional. To many women, this is just large enough to carry without hurting your shoulder. For comparison purposes, the Louise GM satchel bag is not much larger in size than a Louise PM bag.

NM: These initials do not relate to size but instead stand for new model or “Nouvelle Model”.

To fully understand the different sizes, it is best to see a photo comparison side by side.

Compare the Alma BB, Alma PM, Alma MM and Alma GM Side By Side To See Which Size is Best For You

LV handbags come in a variety of materials, consisting mostly of leather or canvas. Here is a list categorizing each.

Other materials for Louis Vuitton handbags include Monogram Mat, Monogram Multicolored, Monogram Mini Lin, Monogram Idylle, and Monogram Vernis. A more extensive list of all the different patterns and materials can be seen here.

We hope you learned something interesting about the history of Louis Vuitton and how the brand is one of the most recognizable in the entire world. Feel free to reach out with any questions regarding Louis Vuitton or any other designer handbags. Five Louis Vuitton Handbags That Can Be Great Investments 10 Tips to Take Care of Your Designer Handbags

Five Louis Vuitton Handbags That Can Be Great Investments

Please check that this widget Google Reviews has a Google Place ID set.

Get Quote For Your Bag